Gosh.
Most of you know this, but several weeks ago, DS called and said, "mom, FedEx is bringing you a surprise". Well, the surprise was 2 tickets to last night's U-2 concert in St. Louis. This was a rather big ordeal for us in St.Louis! They actually tore up all of the turf on the ball field at Bush Stadium in order to set up their staging!!! DD was my date for the evening, and we stayed out well past my bedtime! There were reportedly around sixty thousand people there, and we actually knew several people there! Jenny B., if you are reading, we saw your dad there! DD did an excellent job of planning which parking lot would be an easy getaway after the show. We were only about a 5 minute walk (paid dearly for the parking!) to the stadium, and after the show, we were on the highway 23 minutes after starting the car. Not bad!!! About 90 minutes later we were home - got here about 2 a.m.


I'm sharing photos with you today - hope you don't mind! Between the concert, and DH's new puppy, I don't have any new cards to share today!!!


These photos are not in order! I'll try to explain a bit about some of them. Others are strickly changes in the set, band performing, etc..... self-explanatory.


This first photo is taken as the crowd is beginning to filter in. Wow...ton's of people!!! 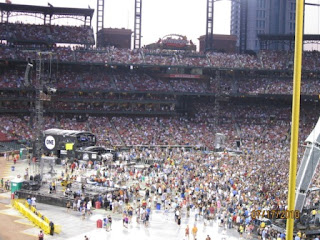 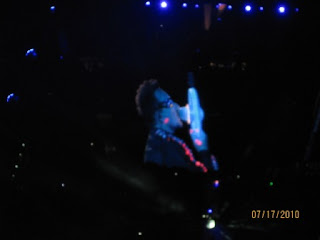 Set toward the end... 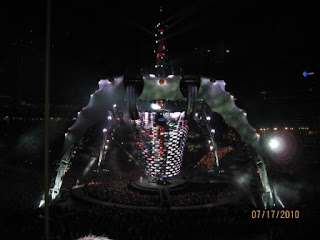 More of set changing toward the end. 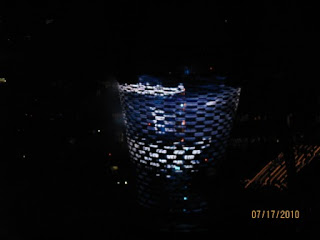 Wish this next photo had turned out better. Bono asked that the lights all be turned out, and for everyone to take their phones out and turn them around lighted, in honor of all of the folks in Joplin Missouri, who are just haning on and trying to survive after their terrible tornado in April. Goose bumps!!! 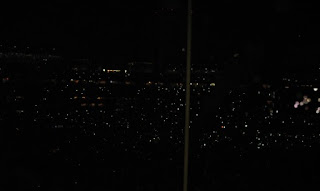 Sorry, out of order! Another early shot, prior to the concert beginning... 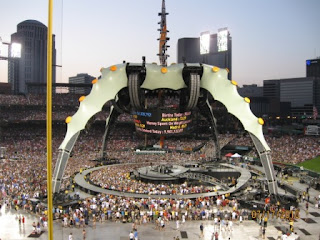 Another shot of the blue set. 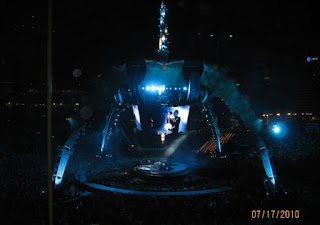 More goose bumps! Serious goosebumps! This is Gabby Gifford's husband telling Gabby and the world how much he loves her from space. Wow..... 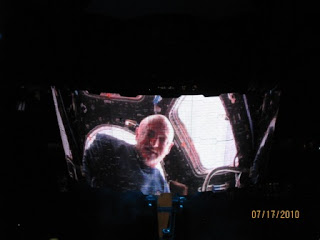 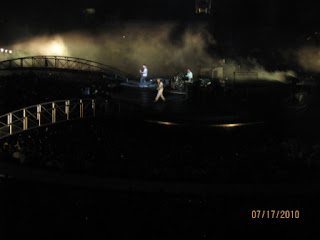 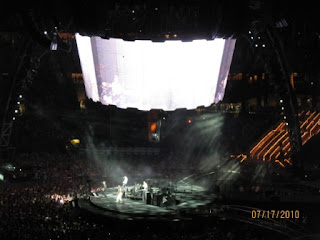 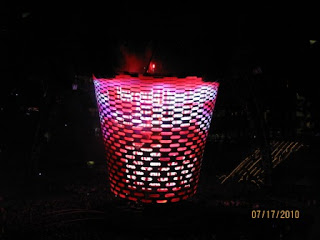 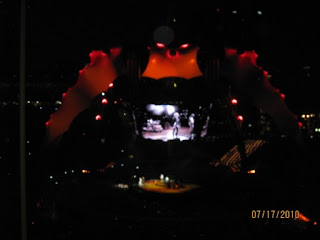 This is where it all happens. The lighting, the sound, the special effects, etc. 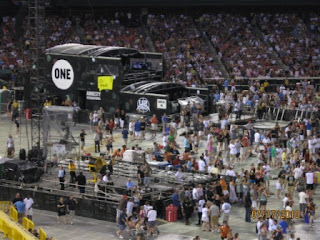 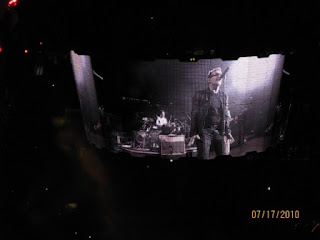 John, if you are reading, thank you so much! What an incredible evening we had!


That's it for today! I'm sure that I either walked or sweated off a pound or two, as it was upper 90's to 100 degrees here yesterday. Time for some foot/ankle elevation!


Take care everyone, and thanks for looking! Don't forget to scroll down and leave me a name in my "Name that Dog" contest!!! I'm extending it until tonight.

WOW!!!! Sounds like you had a fabulous time with your lovely DD! How fun!

Looks so fun and awesome!

Don't know u2 but looks like you had a great time.

It looks like you had a wonderful time Patti! I didn't even put it together 'til yesterday but my DH is very near the field and clearly heard the concert! I've gotta e-mail ya so I'm off to do that now!

Oh wow this looks fantastic and what a fabulous structure. You must have had an amazing time Patti. Annette x

Holy cow Patti what an awesome gift from you DS!! I am sure you and you DD had a wonderful time, great memories for you both.

What a Fab time you must be thrilled! I bet it was spectacular and what wonderful pictures, thanks for sharing Patti. xx Hugs Mau xx

Oh wow!! It sure looks like you've had such a fun time here!! Fabulous photos and great memories for sure!! :) Looks like you are enjoying your Summer! Just wanted to say hello hun!! BIGGEST HUGS

WOW--what an awesome time you must have had....that stage is something else!
Hmmmm, I'll have to think on the dog name...she's a cutie!

You are such a party animal! LOL What an amazing set! It looks like it is straight out of a sci-fi movie. Glad you had a great time! Best, Curt

Thanks for sharing the photos... Looks like you & DD had the best time!

Haven't been to a concert in ages... Sooo jealous!!!

Oh wow!!!! I would have never thought you were a U2 fan, teehee. I bet you would be surprised at a few of the groups on my playlist as well. I'm so glad you got the opportunity to go and enjoy yourself with Melissa!

As feedburner has closed down, here is an alternative if you’d like to follow by email. Thanks!

Patti J
I work very hard at being retired! I’ve been crafting for years, but was introduced to paper crafts in 2000. I dabbled for several years, and soon became hopelessly addicted! I’ve been blogging for almost 22 years now, and love the friends that I’ve met through this hobby. I am blessed with a wonderful husband, who indulges my creative time, and just spoils me rotten - he is my #1 fan! We have been happily married for almost 49 years. Missouri is home to us. We have two grown children, a daughter-in-law and son-in-law that we love dearly, and four amazing grandchildren. Every day is a gift from God, and I try to “Cherish Each Precious Day”. Thanks for stopping by today!